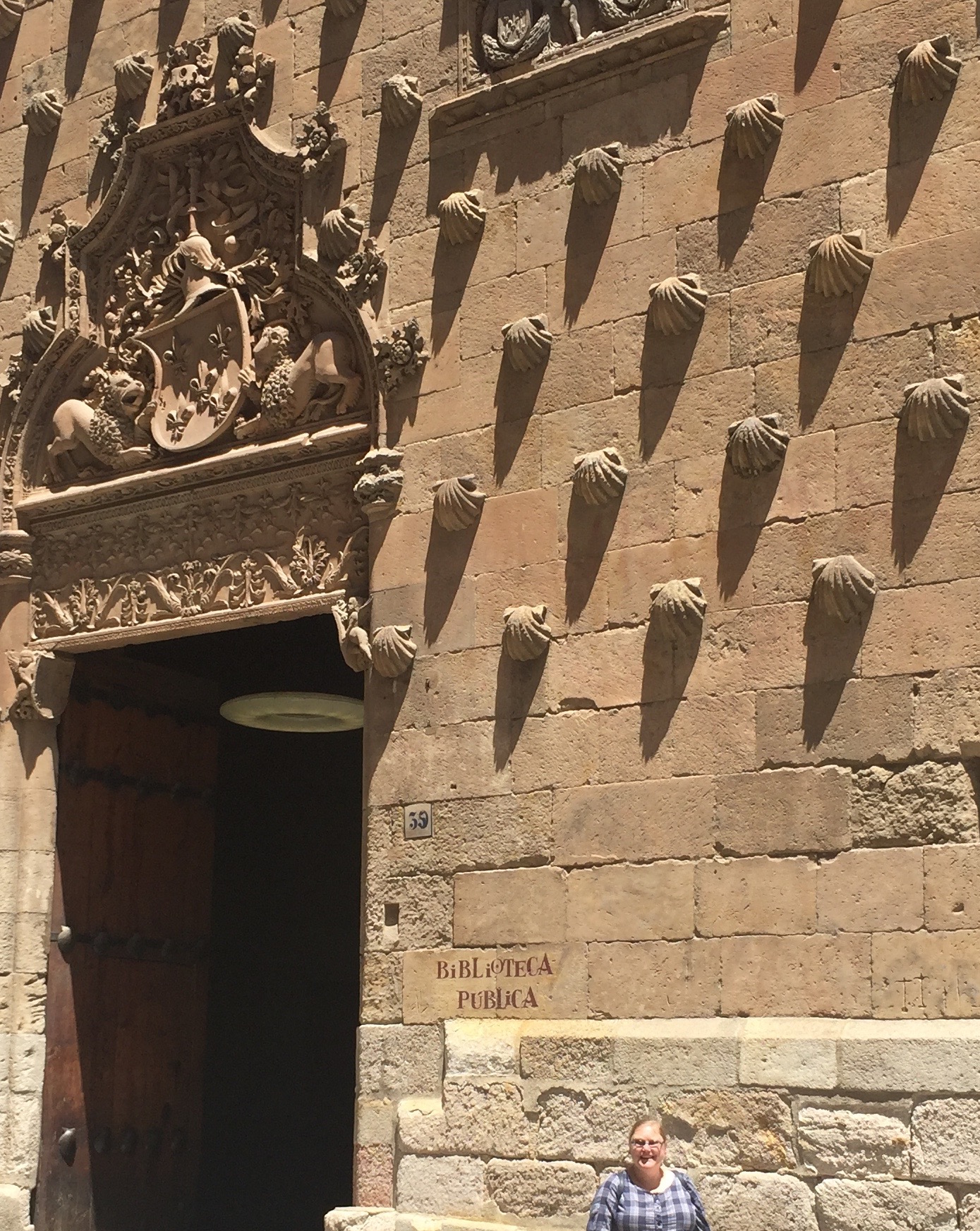 Salamanca is known as La Dorada, “The Golden City.” The buildings glow. Salamanca is so unique and you will be astounded by the golden color of this city. The whole city is beautiful, gold-and-white-colored due to the sand stone, quarried from the nearby town of Villamayor. Not only is the stone beautiful but this particular sand stone is not quite dry when taken from the quarry and therefore easy for sculptors to work with. They have made what is called plaquerettes. The whole city is decorated with pretty plaques with images and curlicues. Personally, I like ornaments and decor because that eases the monotony of city blocks. You will pass many ornate buildings, decorated with plaquerettes. 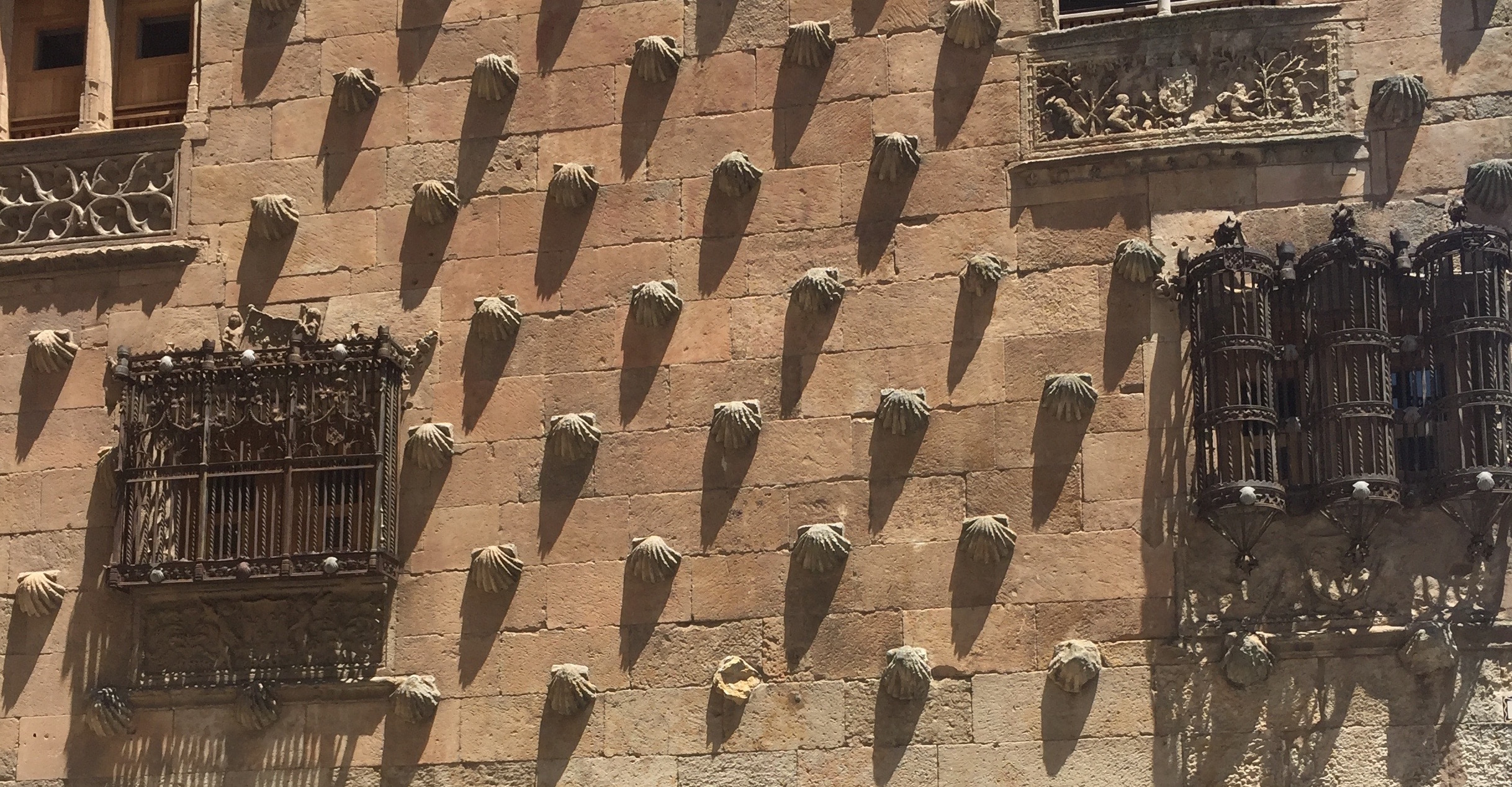 Salamanca is not a big city. It has about 230,000 inhabitants, many of whom are students at the University. Officially founded in 1218, the University of Salamanca, according to all the tourist brochures, is the oldest university in Spain and the fourth oldest western university. They have summer courses for international students. I wish my grandchildren could participate in courses like that at this prestigious university. The University has 30,000 students, the university is, together with tourism, “a primary source of income in Salamanca.”

Salamanca does not have a Hop-On, Hop-Off bus (the hoho), but Salamanca does have a miniature-train that takes tourists around the University and central part of town. You get on the train by the New Cathedral, next to the University. The train will take you through the University, first of all. The train also takes you to areas with impressive private houses. Everything is so clean and orderly on the narrow streets. 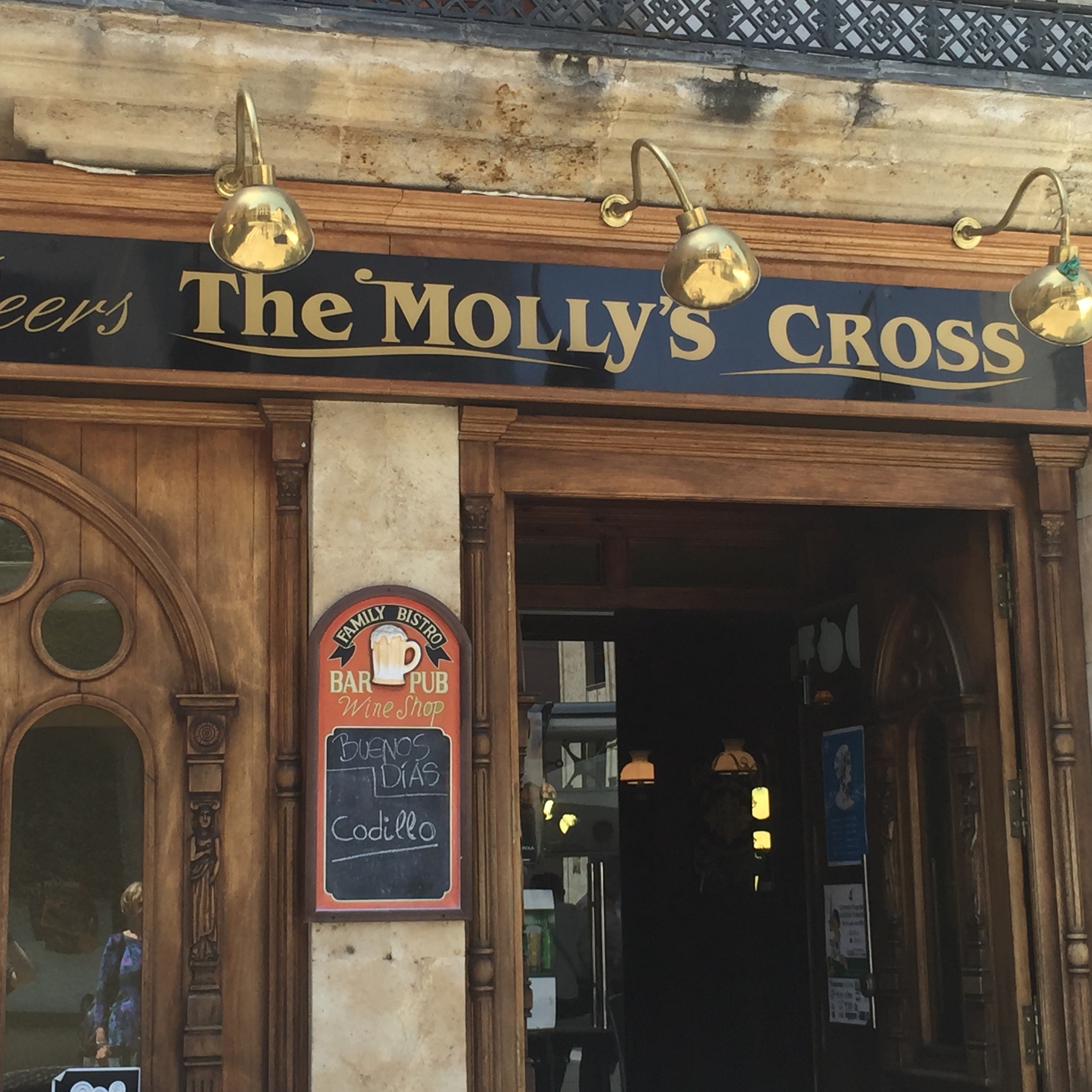 You only get to go once for the fare you pay. I mention this because I, or we, tend to travel around a new city on the hoho-busses twice. We usually buy 48-hour tickets.

The whole of Iberia seems to be a huge museum. When you travel in Spain and Portugal you are constantly reminded of their history. The tourist industry tells us about the many ethnic groups of people that have inhibited the peninsula. Many people have conquered and owned the entire Iberian peninsula or parts of it over thousands of years and they have all left their imprints. Tourists are treated to beautiful ancient buildings or to ruins of these buildings and to artefacts. The different people also left their names of places.

A little bit of Iberian history: A modern tourist soon learns that what has happened in Spain during the last 1300 years is still very much a part of everyday life.

The first important date to remember is 711 A.D. This is the year when the Moors began their conquest of the Iberian peninsula. They were mainly Berbers from North Africa and there might have been some Arabs among them. They brought with them their Muslim beliefs. The area where Salamanca is today fell to the Moors in 712. The people that lived there, eventually fled as Salamanca ended up in the war zone between the Moors and the Christian kingdom of León and the Christian kingdom of Castile. After a battle in 939, the Christians reconquered the town of Salamanca. By the way the two powerful kingdoms were sometimes combined and sometimes separate states, but after the year 1220, Castille and León became one state.

The next historic event to remember occurred in 1085. Alfonso VI, king at that time of both León and Castile, conquered Toledo just south of Madrid. If you visit Toledo you will be in awe of what a feat it must have been to conquer the high cliff. Alfonso VI was a strong and energetic person. Do look him up on Wikipedia. It appears that he was married at least five times and that he had two mistresses in between marriages. I promise you this is not idle gossip. It is gossip, but not idle gossip because his offspring by two different ladies had a definitive historic impact on the Iberian peninsula. Alfonso VI lived between 1047 and 1109. With one of the women/queens whom he married he had one (surviving) daughter Urraca (1079 and 1126). She was married to Raymond of Burgundy (1070 and 1107). Then, by an interesting lady who probably was Basque and who became his lover Alfonso VI had a daughter Teresa (1080 and 1130). She was married to Henry of Burgundy (1066–1112). Urraca and Teresa were half-sisters, and married to two men, cousins of the family Burgundy. As there was tension between the women the two men eventually drifted apart. Urraca and Raymond were put in charge of large areas of what we today call Spain while Teresa and Henry were given some influence in today’s Portugal, but their station in life was to be vassals under half-sister Urraca and her husband Raymond. We can imagine the irritation. Eventually Teresa proclaimed herself Queen of Portugal, which was not accepted everywhere. However her and Henry’s son Alfonso Henrique became Portugal’s first king. He is still seen as a hero in his own right in Portugal. By the way, Salamanca is situated only 50 miles, 80 km, east of the Portuguese border.

The history of Spanish and Portuguese royalty are relatively easy to follow compared to the impenetrable thicket of royal and aristocratic family trees in the rest of Europe, which has ignited so many small and big wars due to conflicts of succession after the death of dynastic rulers. In that respect Spain lived in peace for 600 years.

Raymond of Burgundy started the re-settlement of the Salamanca area in 1102 on his father-in-law’s order. Raymond is the hero of Salamanca where he was called “Re-populator” for getting Salamanca on its feet again.

Salamanca has two Cathedrals, the Old Cathedral and the New Cathedral. 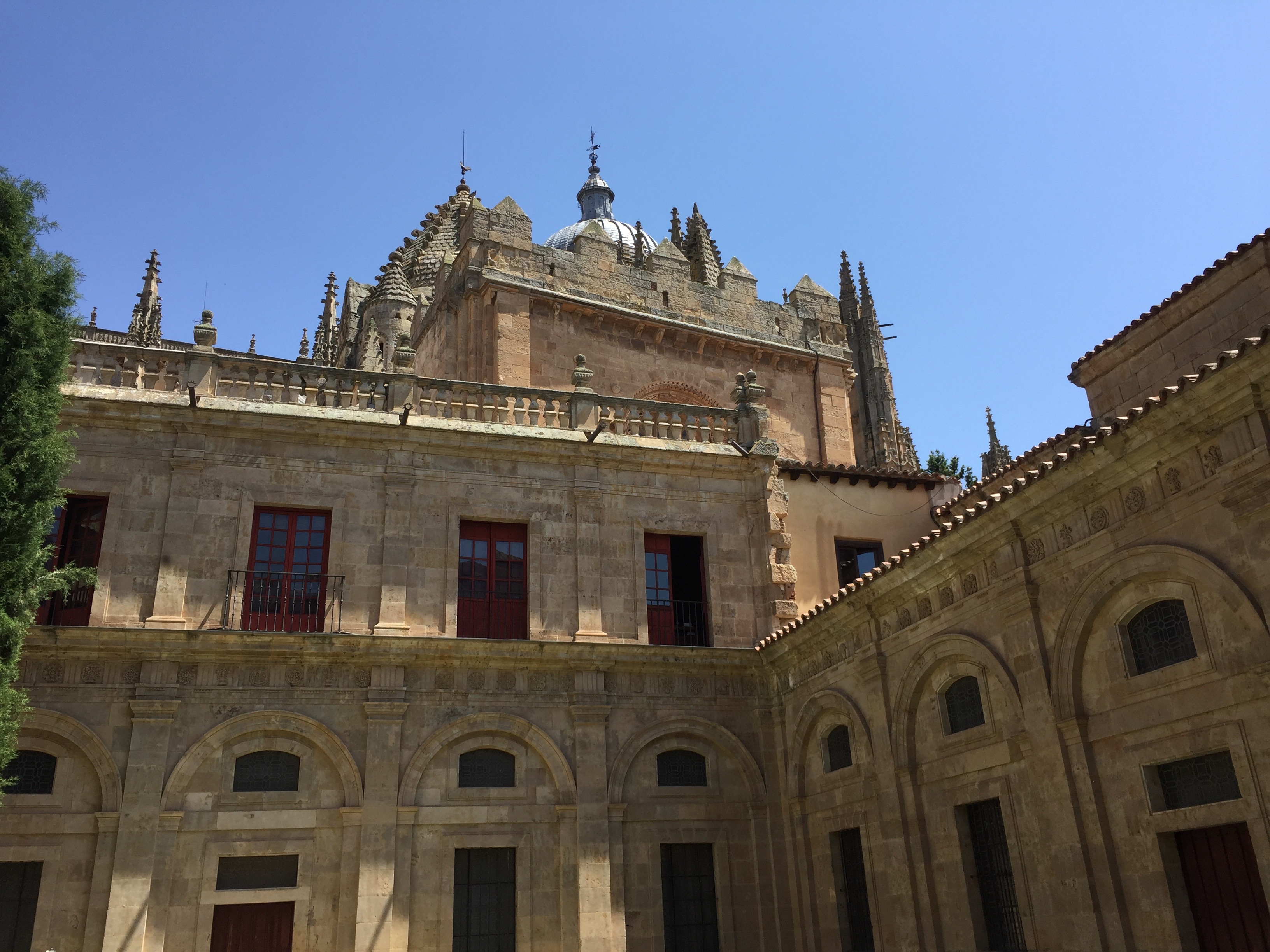 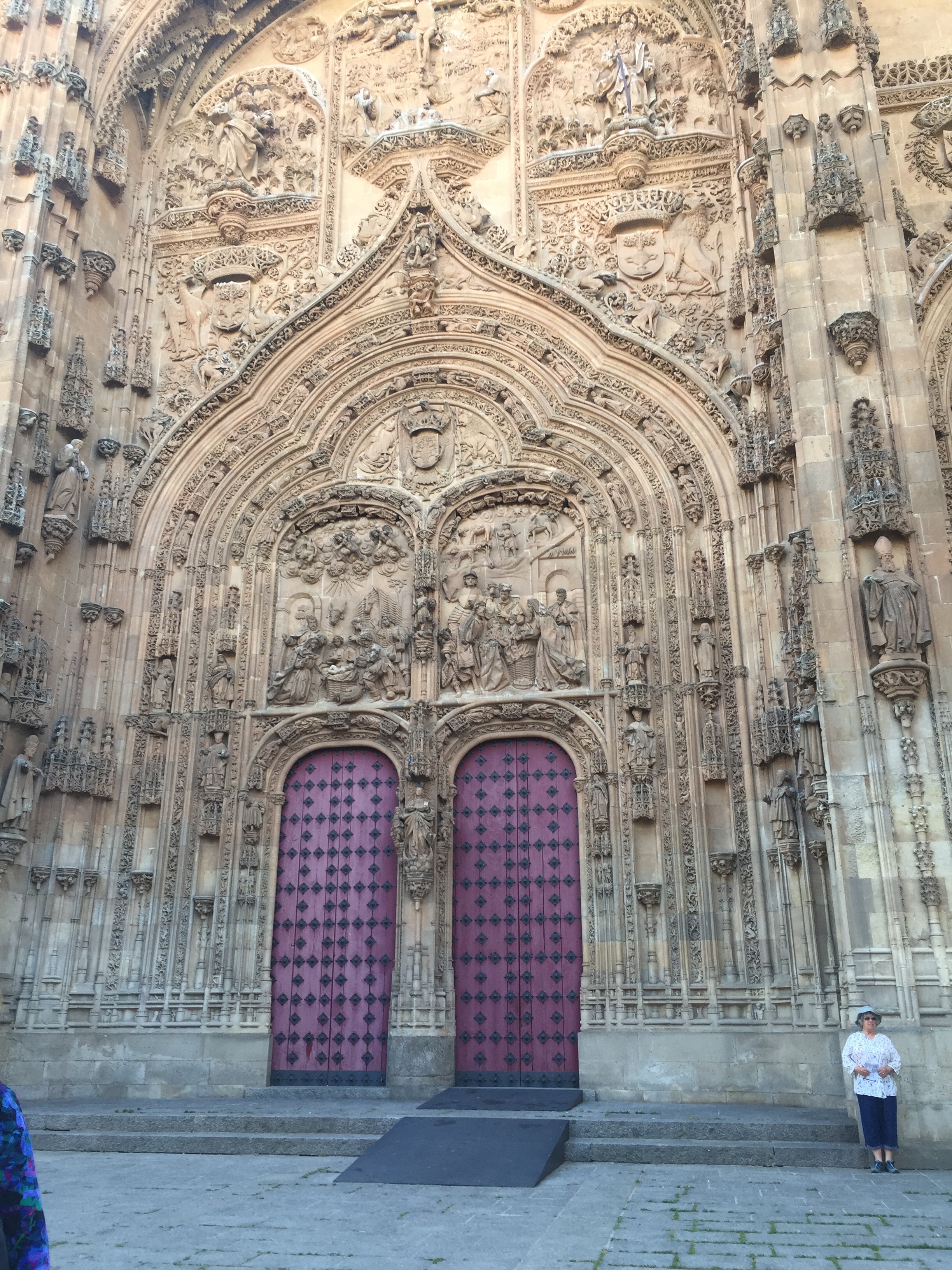 After the ride with the mini-train for tourists we, went into the New Cathedral. The majestic building took 200 years to build, beginning in the 16th Century when the city had grown and a larger main church was needed. 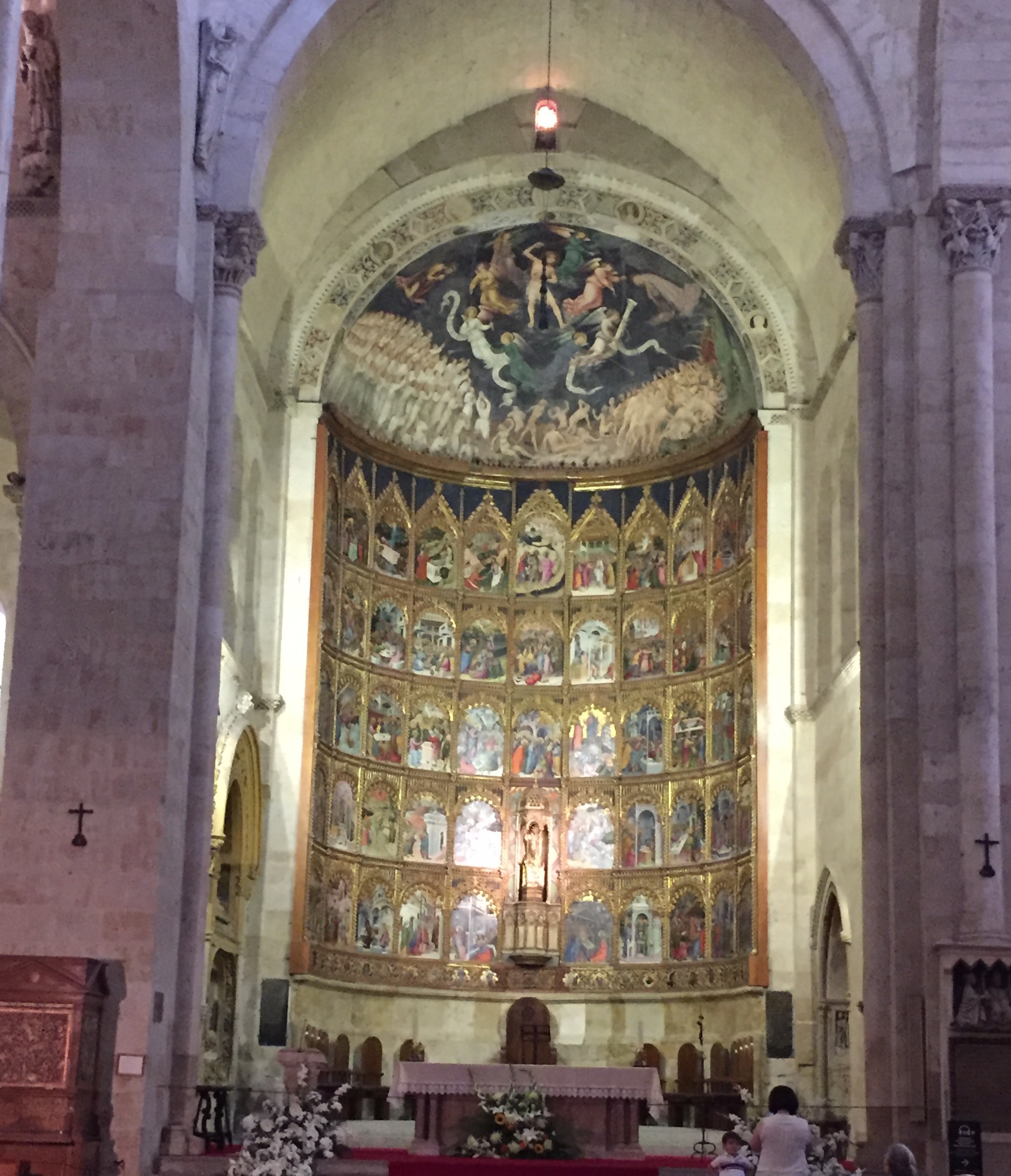 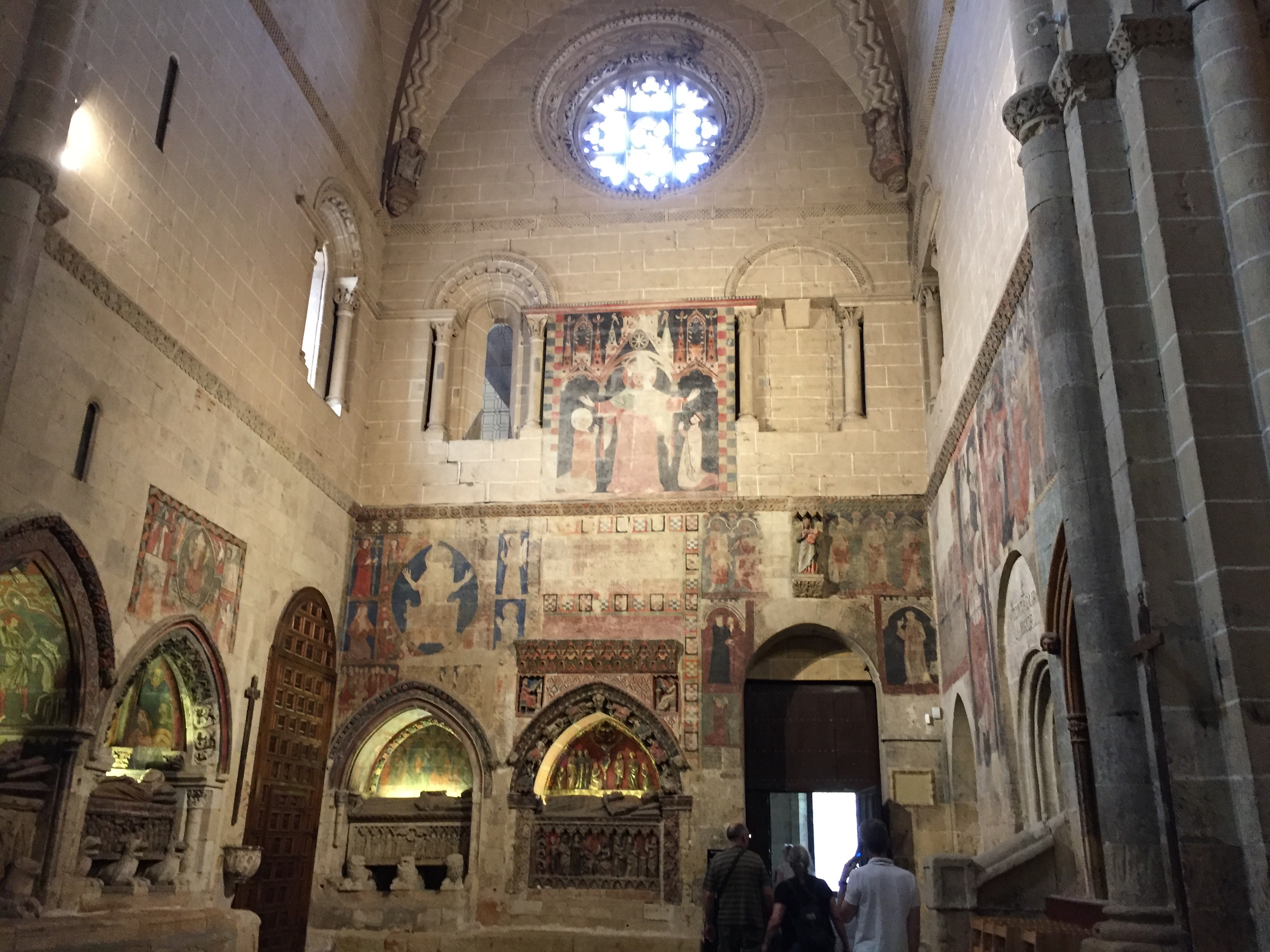 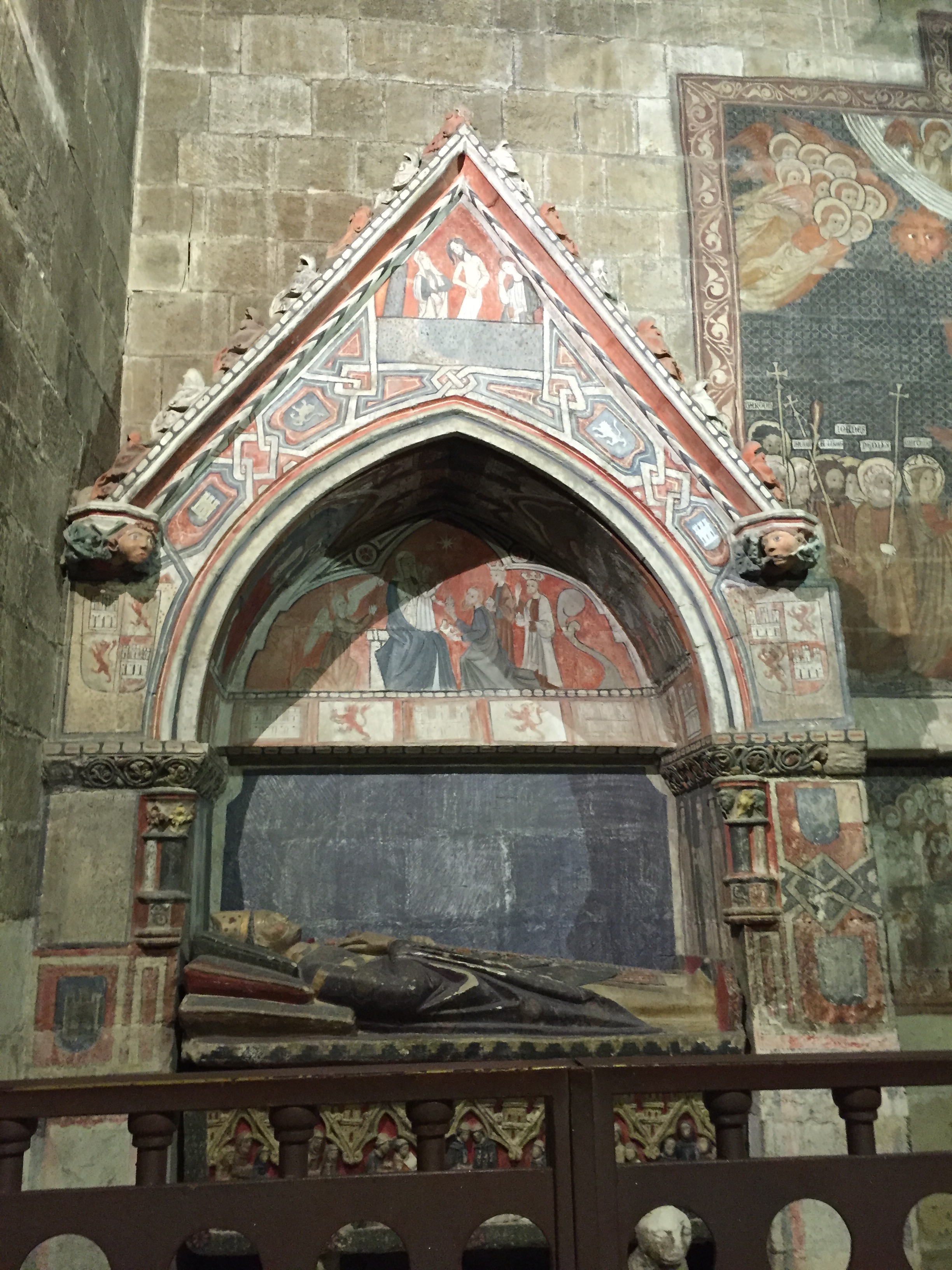 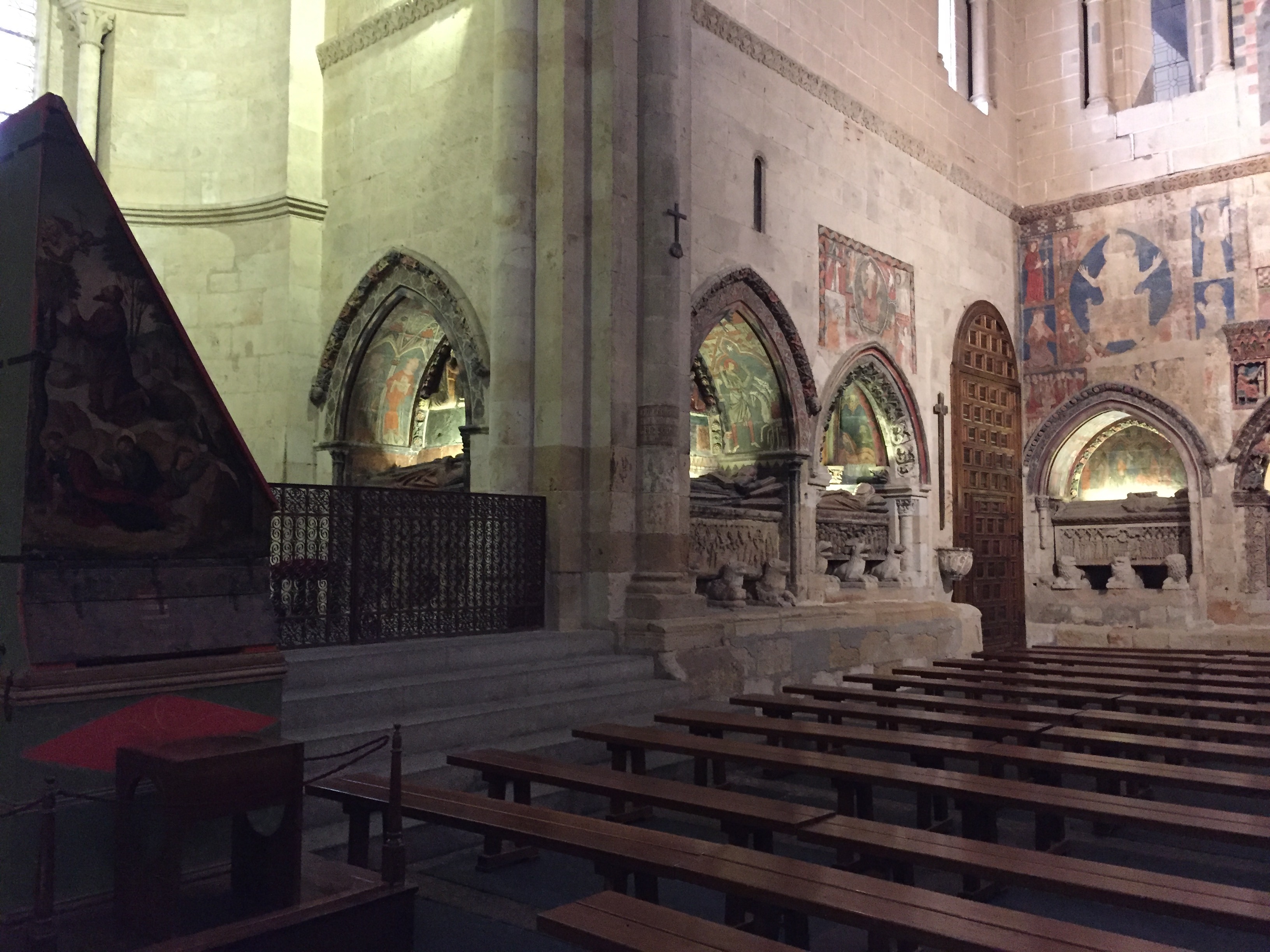 Luckily, the people of Salamanca did not tear down the Old Cathedral. You walk through an opening into the Old church that dates back from the late 12th Century and has beautiful medieval paintings. I like architecture and I like churches. I am a bit religious, but I think anybody can enjoy the beauty of these two cathedrals, its craftsmanship and aesthetic impact. 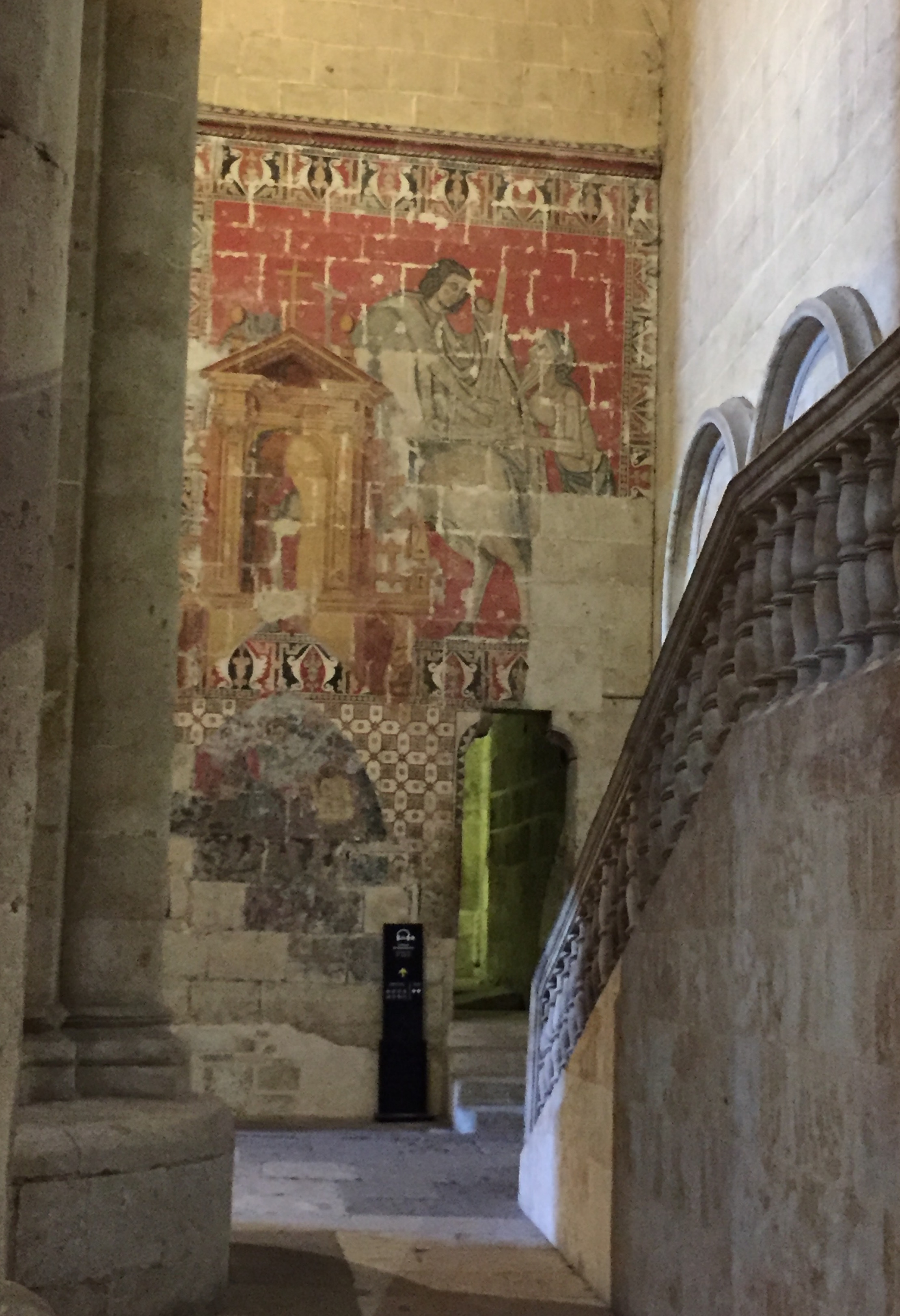 From the Cathedrals we started walking around the University. We were looking for the bookstore and above all for a special building, the “old University Library” with a famous painting on its ceiling from 1480 by Fernando Gallego. The painting is awesome! We were not allowed to take pictures of it, so I urge you to look up “Images of the Sky of Salamanca” on the Internet. In the many pictures you can see the beautiful painting of the sky and stars as perceived in Spain in 1480.

I want here to make an odd little aside. Although we were at a University, we had a hard time finding anybody who spoke English. It took a while to locate the painting. Yes! We know that we should learn Spanish! On the other hand when we were in Portugal we found that “everybody” spoke English. We found it odd that two countries that are so close and that are perceived—by us at least—to be very similar had such differences. Portugal is more of a seafarer nation, and I assume that has created other social norms.

Plaza Mayor, the Main Square. We had a very pleasant room with a small balcony over the Plaza. I woke up several times during our two nights there, and I could take video and photos as the light was fine. The whole Plaza is lit up during the night.

Plaza Mayor has its own rhythm. It is like a self-sufficient, huge beautiful being with its own life, not caring about what us humans are doing. Between 4 a.m. and 7 a.m. I did not see any person except the cleaning-personnel and their machines tending to the Plaza, vacuuming, and doing what they had to do. Around 6.00 the trucks that deliver drinks and food to the many restaurants arrived. Then at about 7 a.m. people started to trickle in and use the Plaza as a shortcut, walking diagonally across between the four main exits. 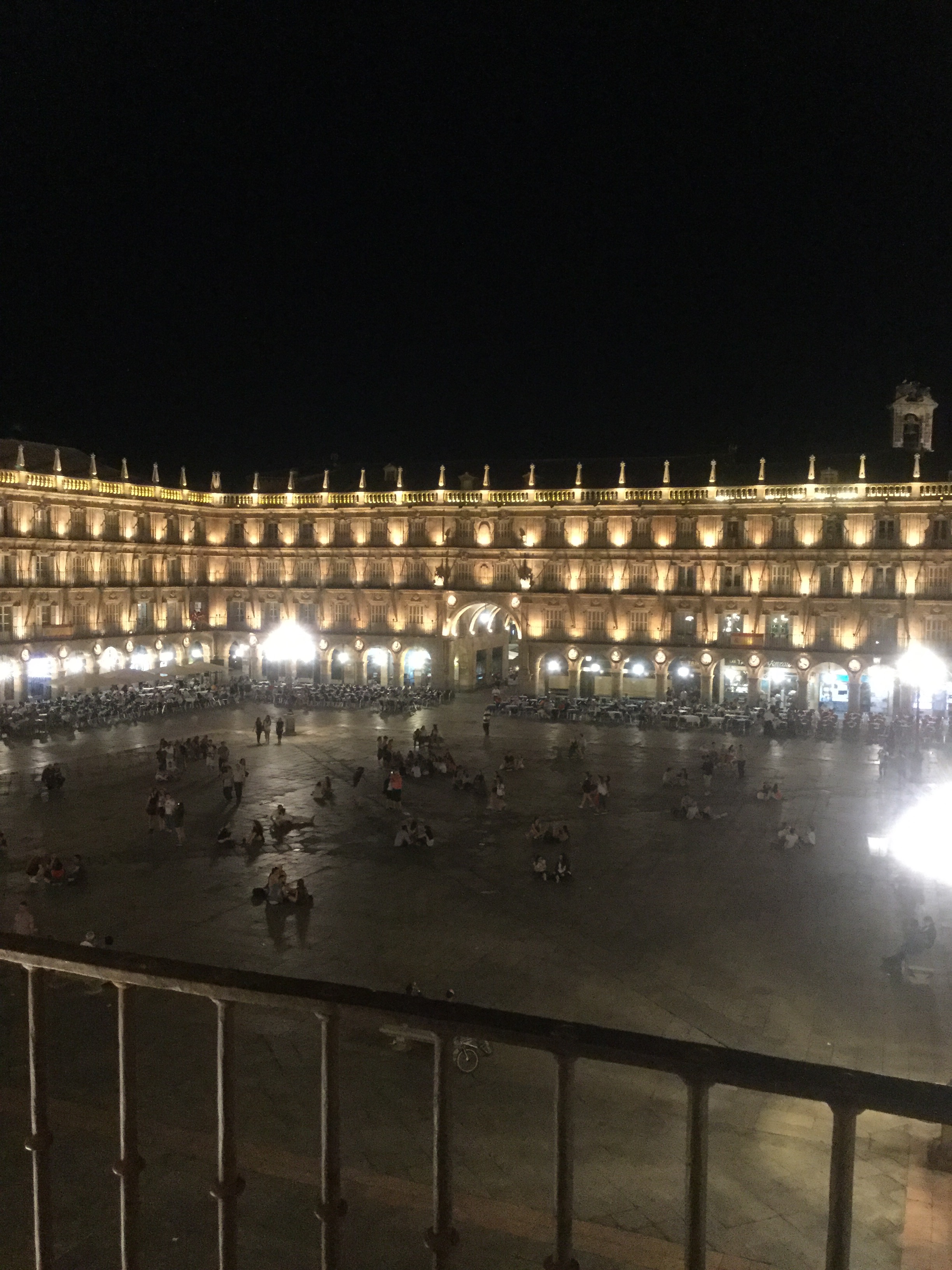 On the Plaza, every night during summer, people stay long after midnight in small groups or couples. They just sit on the pavement enjoying the fine atmosphere. The Plaza reminded me of the cheerful paintings by Brueghel, father and son, with people, having a good time, scattered all over the canvas.

As more and more people came walking past it looked like a ballet with dancers crossing each other’s paths. I actually thought about the Esther Williams movies I saw in my youth with synchronized swimmers.

I enjoyed so much standing by our opened French windows just watching the people.

During the day, people, covered from the sun, stroll under the Arcades around the square, looking at the store windows or heading for their favorite coffee shop or restaurant. During one of the evenings when we visited Salamanca, Spain was playing in the European Soccer Championship. All the restaurants provided huge TV-screens, placed in front of their tables out on the Plaza. That night, people were dressed in the Spanish colors of yellow and red, and were waving Spanish flags. Of course that evening the atmosphere was tense and excited. 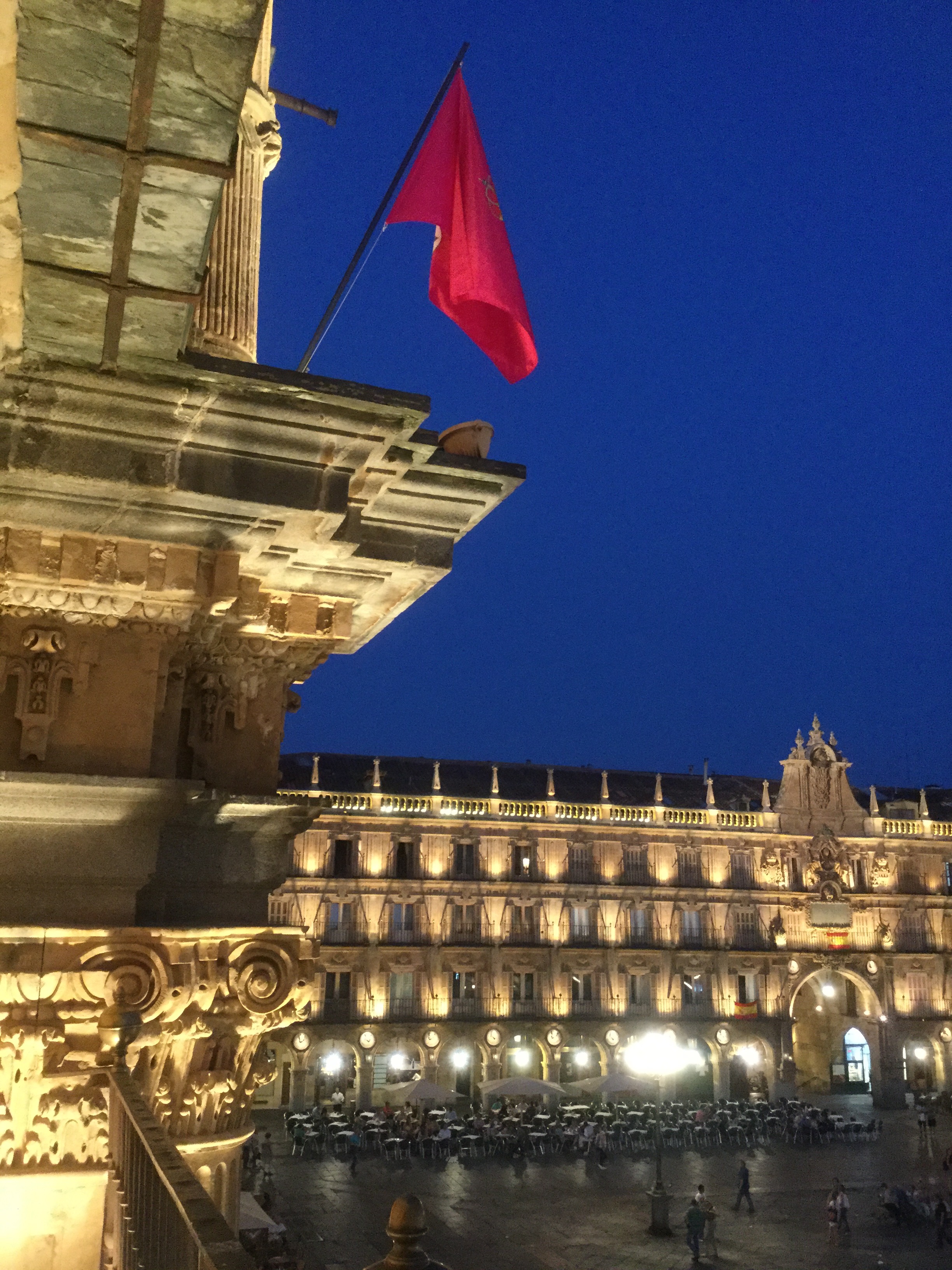 If you allow me to say that people can “fall in love” with a city or place then I shall tell you that I fell in love with the Main Square, Plaza Mayor in the Spanish town of Salamanca.

What made me interested in travelling to Salamanca was James A. Michener’s book Iberia where he writes that Plaza Mayor is one of the four most beautiful city squares in the world. I had already fallen in love with one of the others, Piazza San Marco in Venice.

I do think that Michener’s Iberia is the best tourist guide for Spain and Portugal, although more than fifty years old. Today, it is so easy thanks to the Internet and e.g. Amazon to find literature about places one wants to visit, books out of print, older books. It costs to little to take a chance on some of those used old books and sometimes one makes great discoveries. I discovered Plaza Mayor in Salamanca in out-of-print books I bought through Amazon. What made it so fantastic for us was that we discovered—via the Internet—that one hotel on a side street had managed to buy up a few floors in a corner of the Plaza and connected these rooms with long corridors. The price for these rooms was a bit higher but not bad and what we got was a (tiny) balcony over the square—one of the four most beautiful squares in the world.

There is another hotel that is half a hostel with shared bathroom and partly a regular hotel and it too has rooms with a view over this fabulous Plaza.