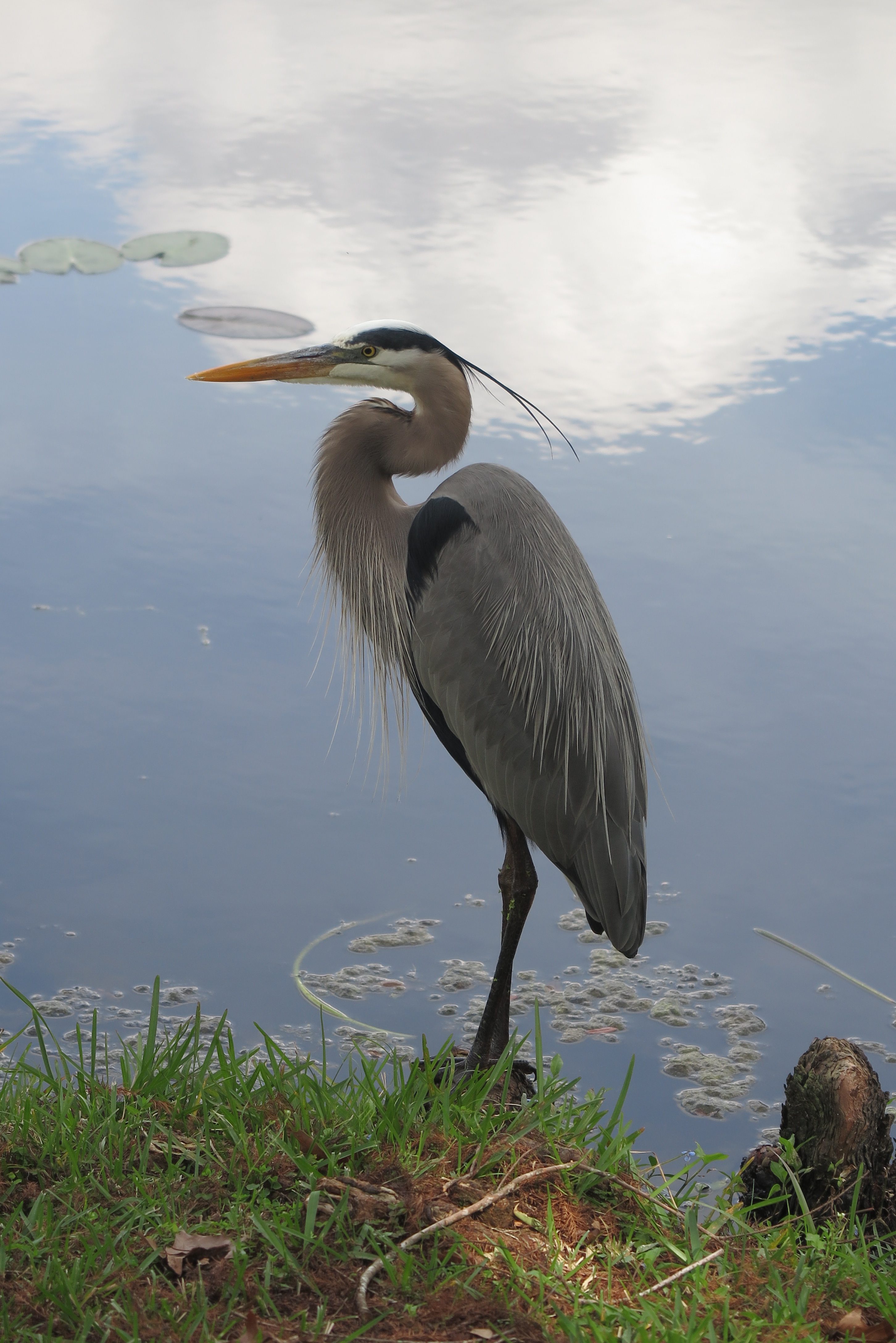 For me Disney World in Orlando is an eighth wonder.

Out of the swampland of the Reedy Creek, large as the whole of San Francisco, Walt Disney (1901-1966) and his companies started buying up around 1965 and made plans to carve out what I would call a horizontal sculpture with man-made lakes and canals and proper land.  That is more than 50 years ago.

By the way, Disneyland in Anaheim, California, opened in 1955.

What is not well-known is that Walt Disney planned a town in the style of early 20th-century architectural, Celebration, a couple of miles from the Disney All-Stars Movie Resort, just on the other side of Interstate 4, the overly busy I-4. Three lakes are carved out of the swampland, connected by boardwalks through the subtropical forest. The walkway around the first lake is almost one mile, a little more than one kilometer. The first two lakes have one Great Blue Heron each, watching over his—or her— territory. It is of course a delightfully beautiful bird to watch. 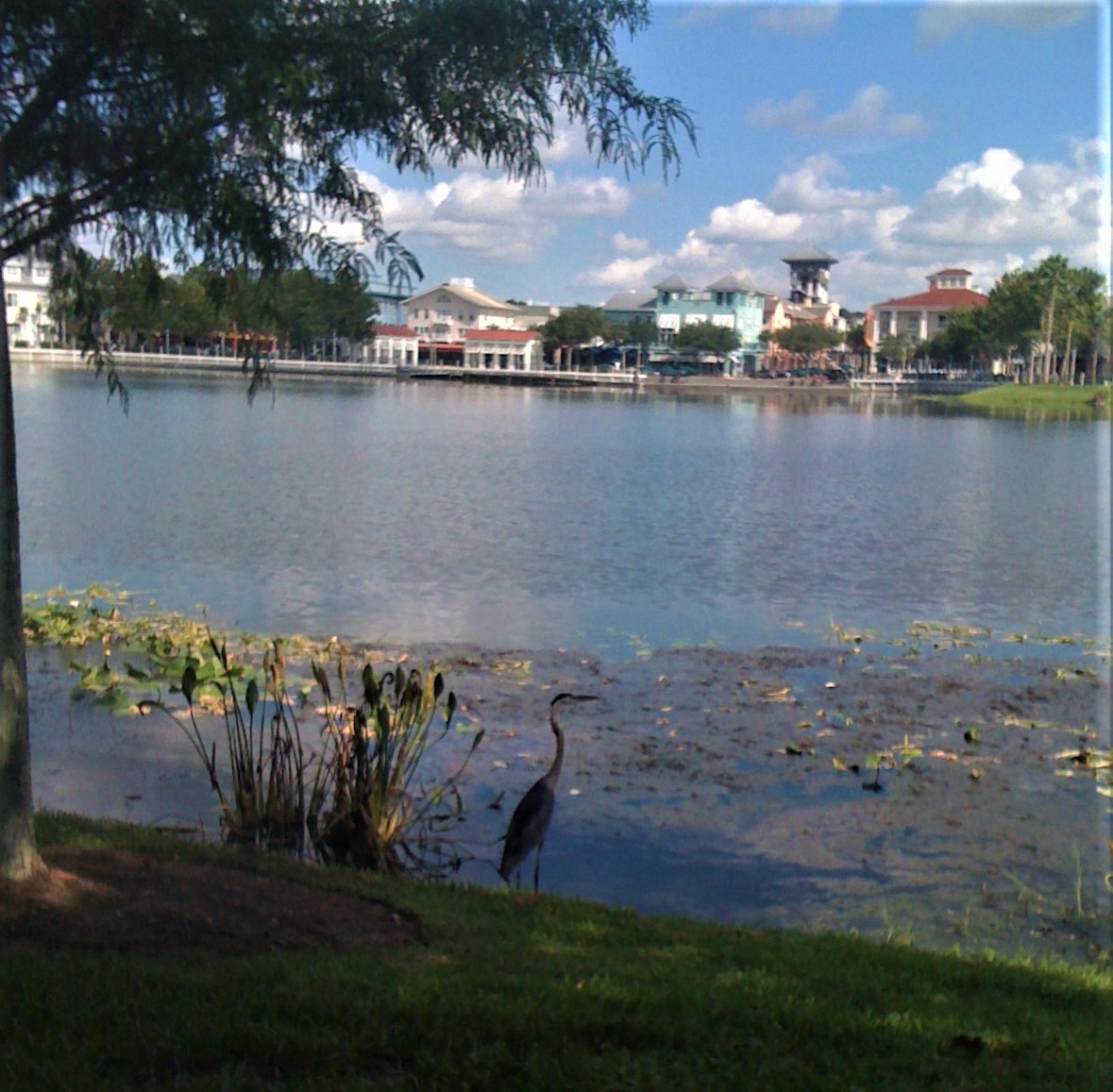 A view of “downtown” Celebration. The small “downtown” has one road along the quay and one short street with boutiques, and a dozen restaurants— and one Starbucks.  Most of the restaurants have tables on the sidewalk, so people can bring their dogs.

If I didn´t live in Orlando I would check into the Bohemian, the hotel in “downtown” Celebration.  One thing I love very much about that hotel is that it has a Gallery in the corridors for paintings, paintings with Florida motives like beautiful trees with Spanish moss that look so romantic. Makes me think of the movies Gone with the Wind, or Fried Green Tomatoes, or Forest Gump. Very Southern States. 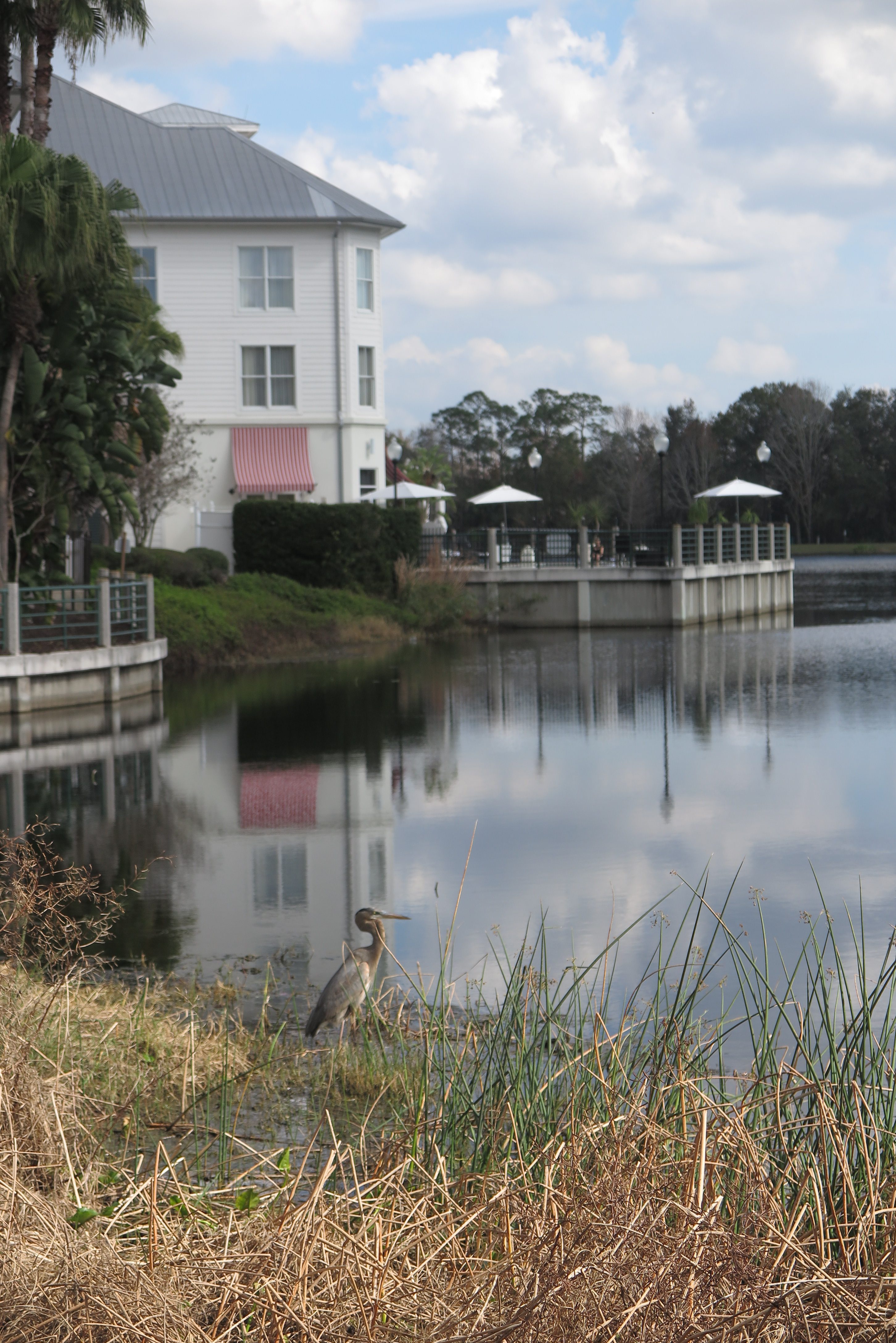 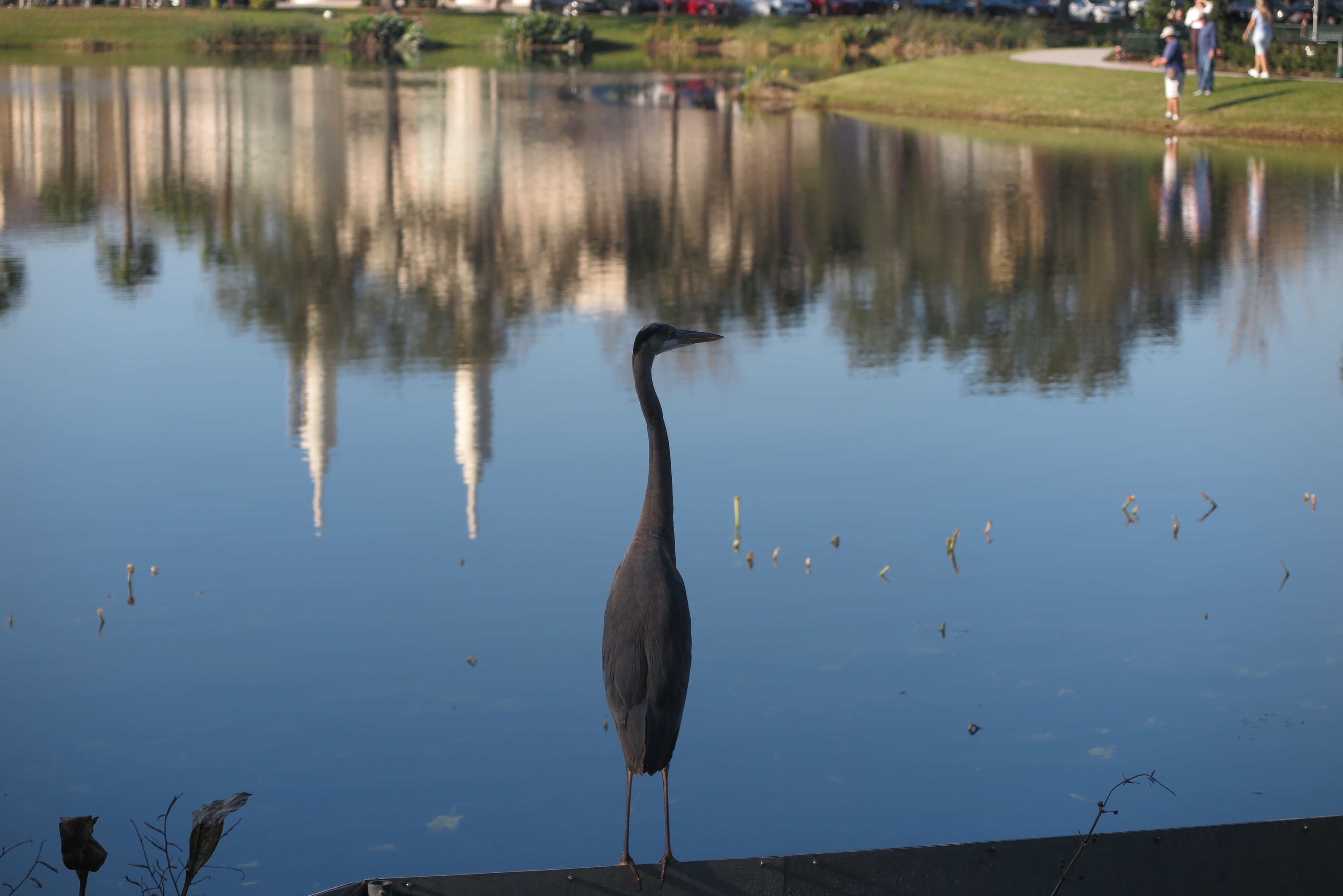 There are just enough people on the walkway around the lake to nod to, and even stop and talk to for a minute. There are people from all around the world in friendly conversation with people they never met before and probably never will see again outside this friendly moment in Celebration. Celebration is a Monument of Friendliness. 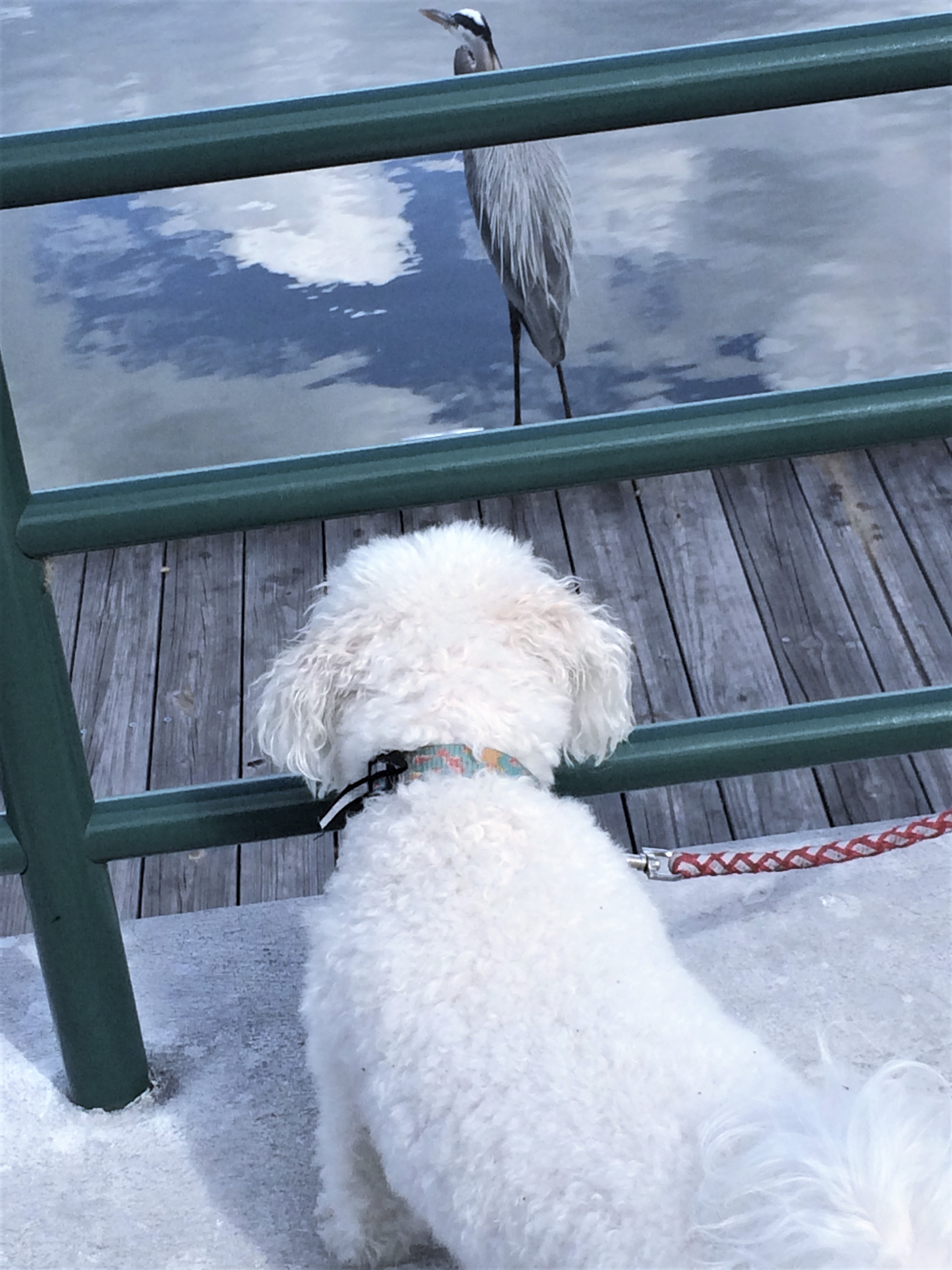 A photo of my dog who would like to chase the Big Blue Heron. 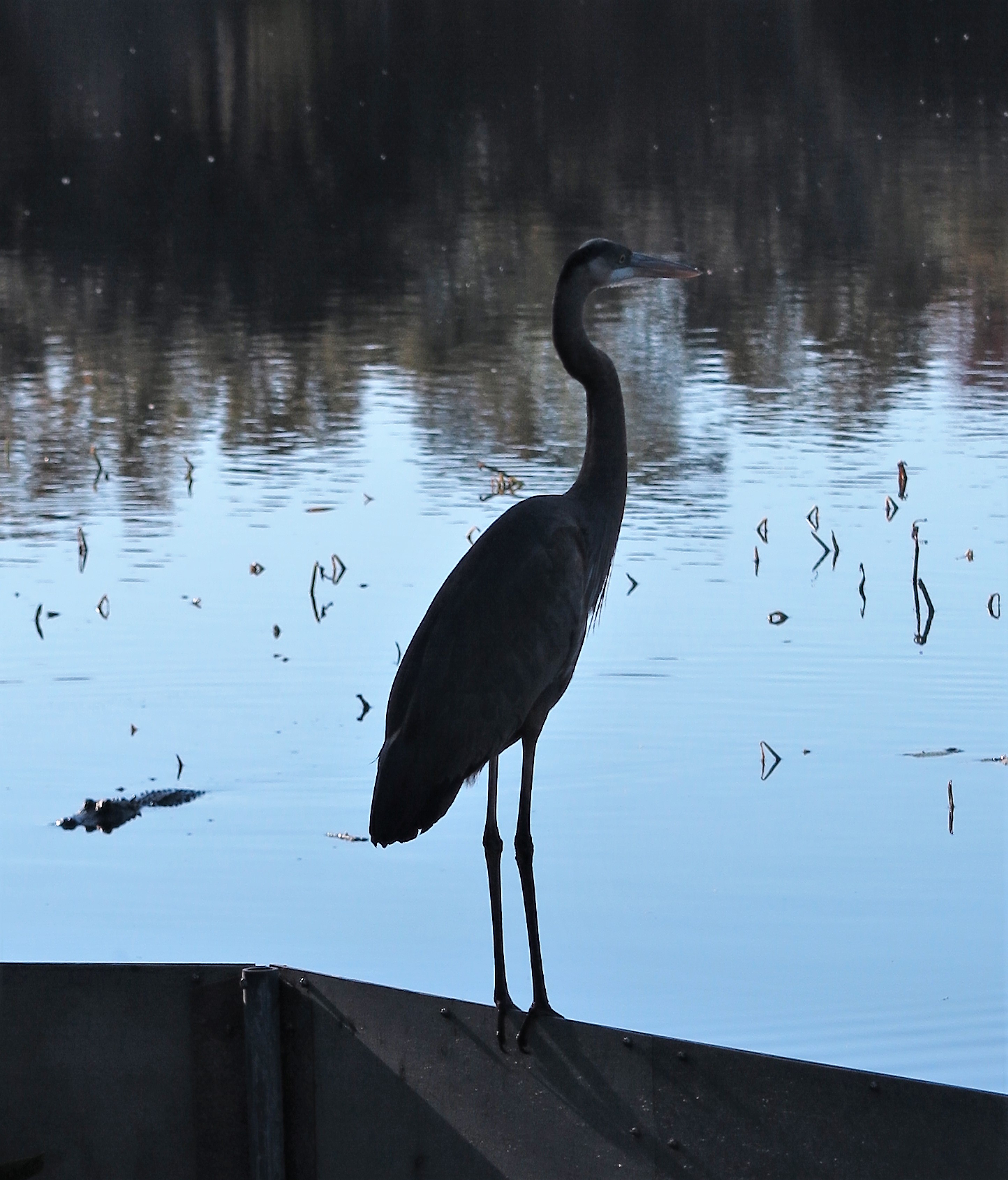 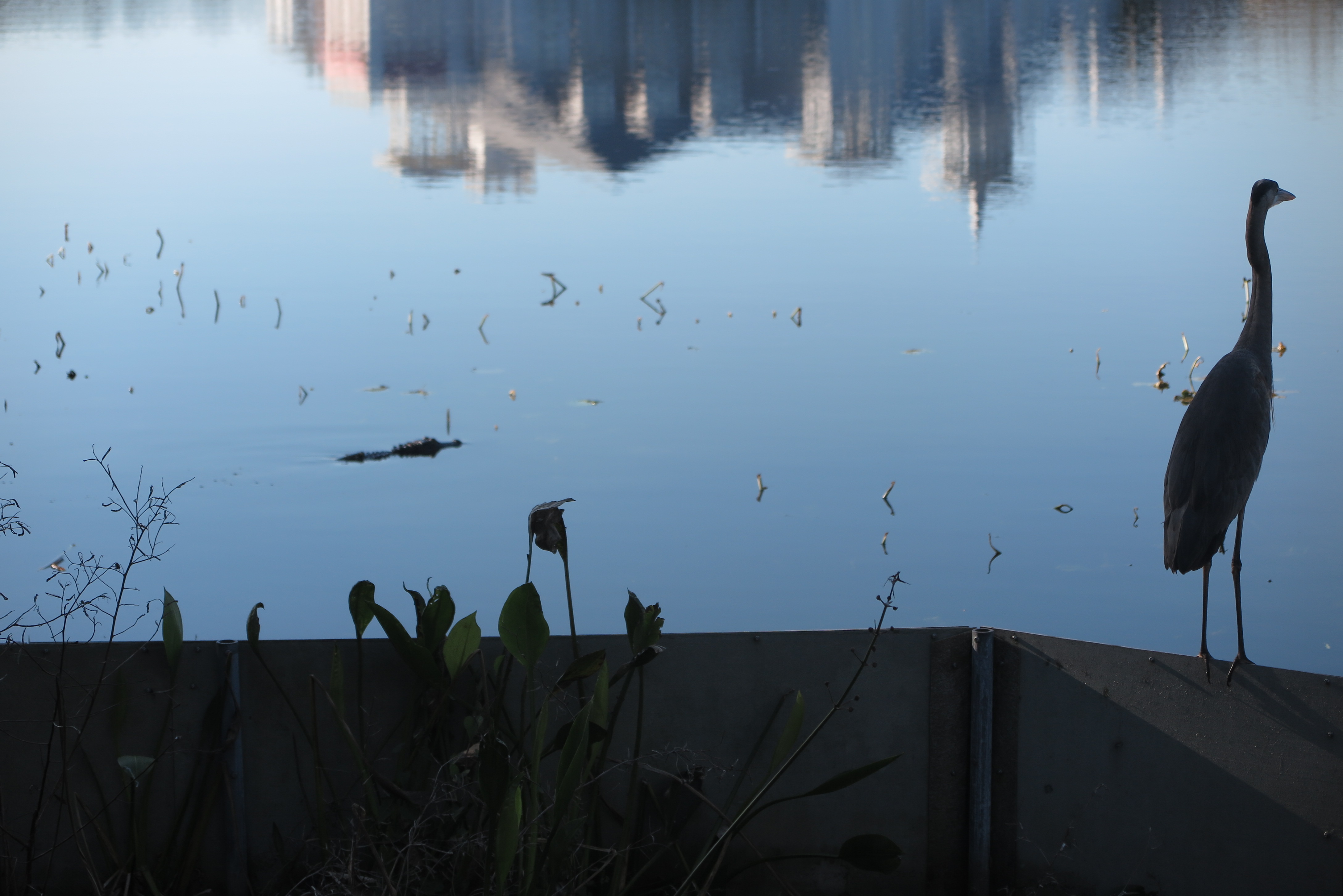 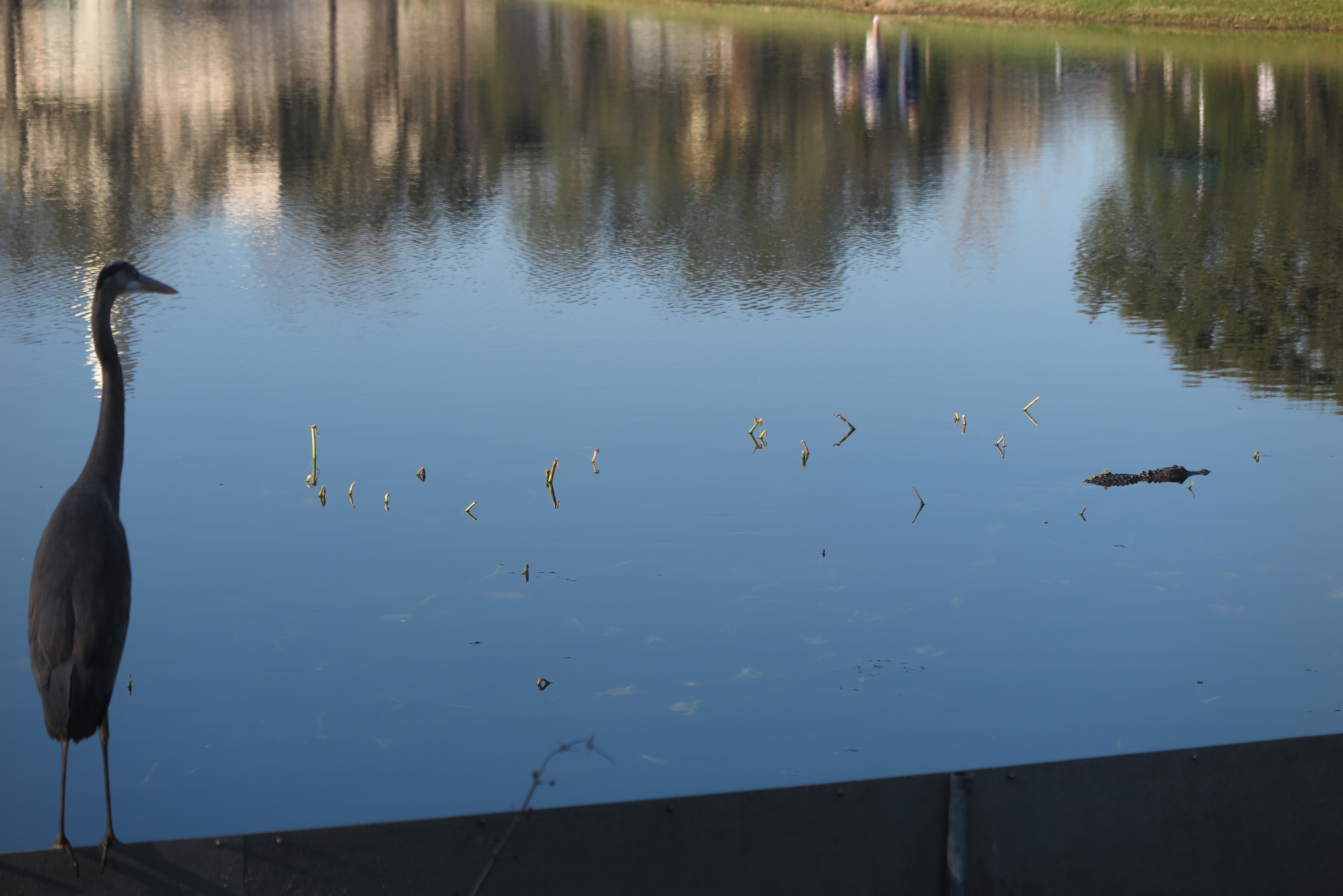 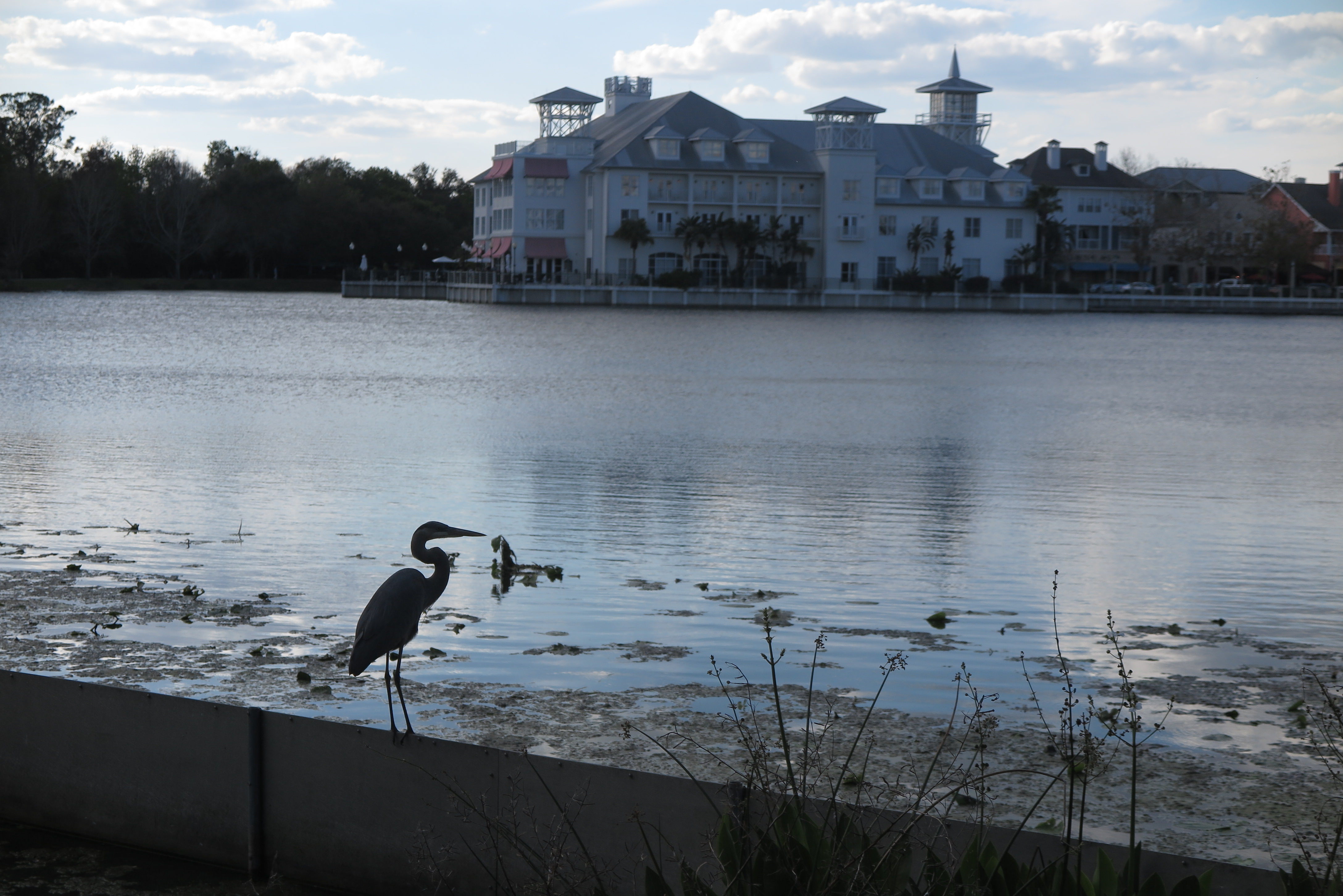 Yesterday, Saturday, March 4, 2017, I and my dog started walking around the first lake and I was thinking that I would be disappointed if I did not see the heron.  And there it was, sitting still on the barrier, built to shield the small dam where water runs down to the swampland behind. 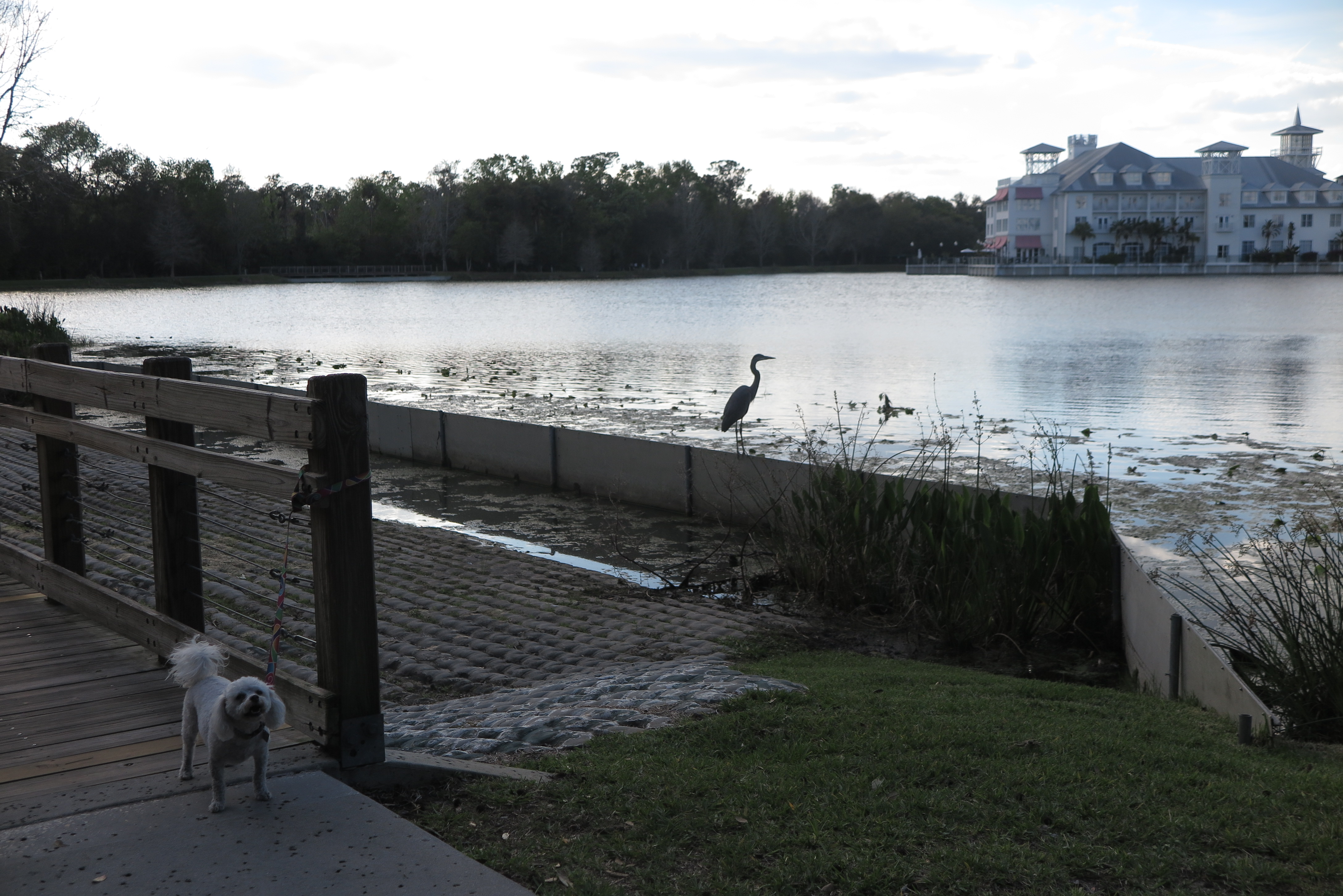 Such a nice evening walk. 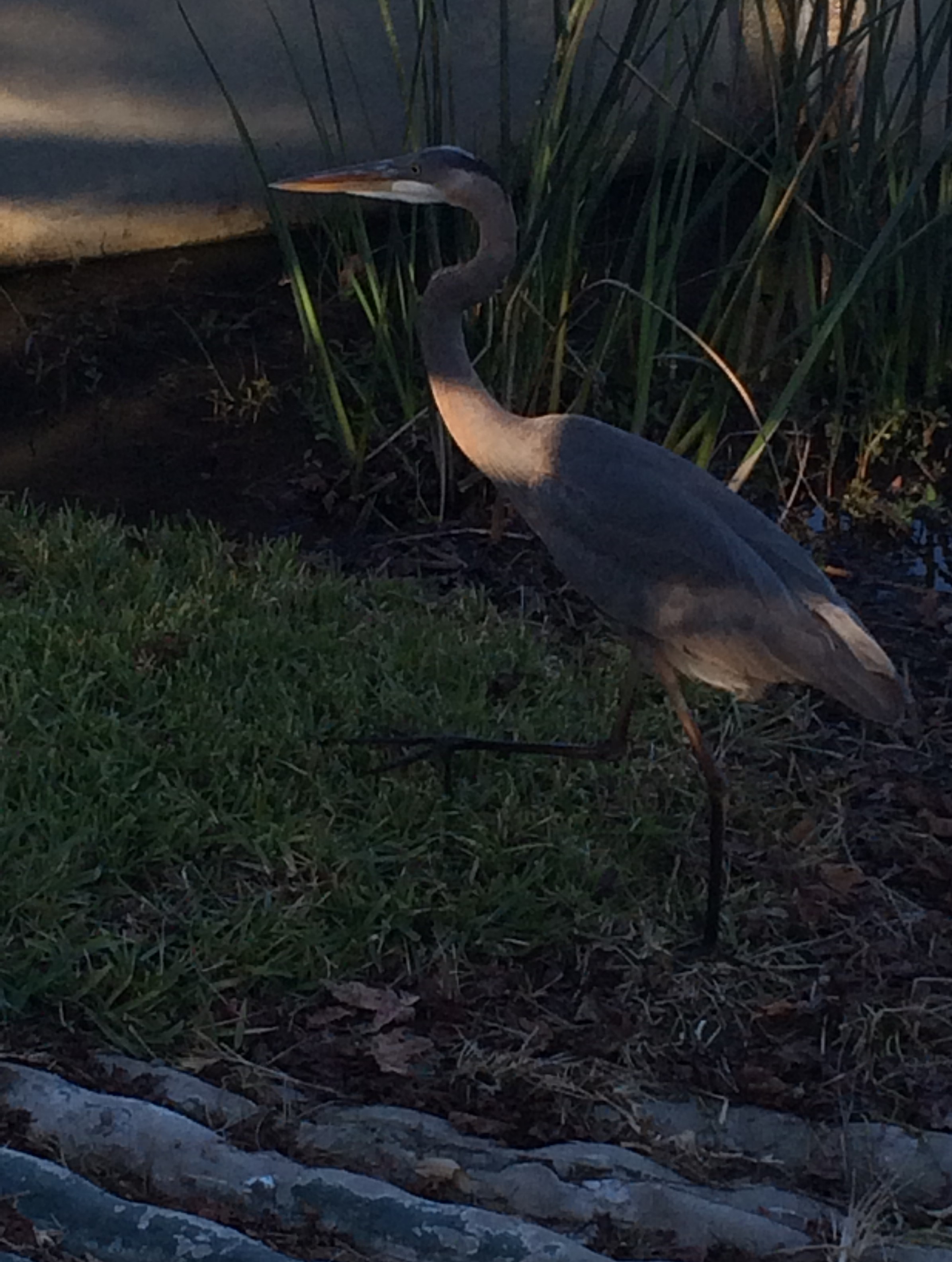 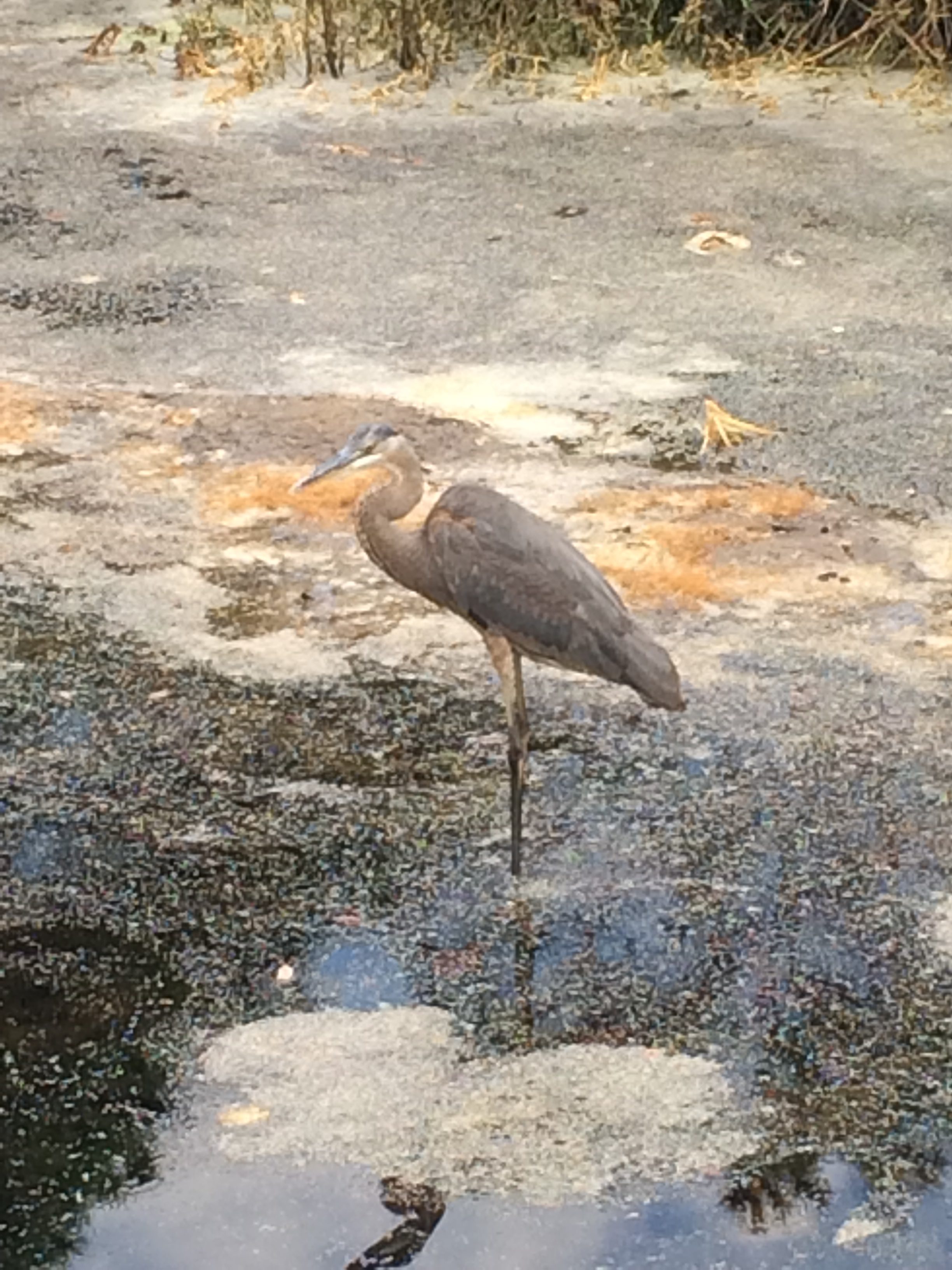 This flower that grows in Celebration is called Bird of Paradise and reminds me of the Herons. 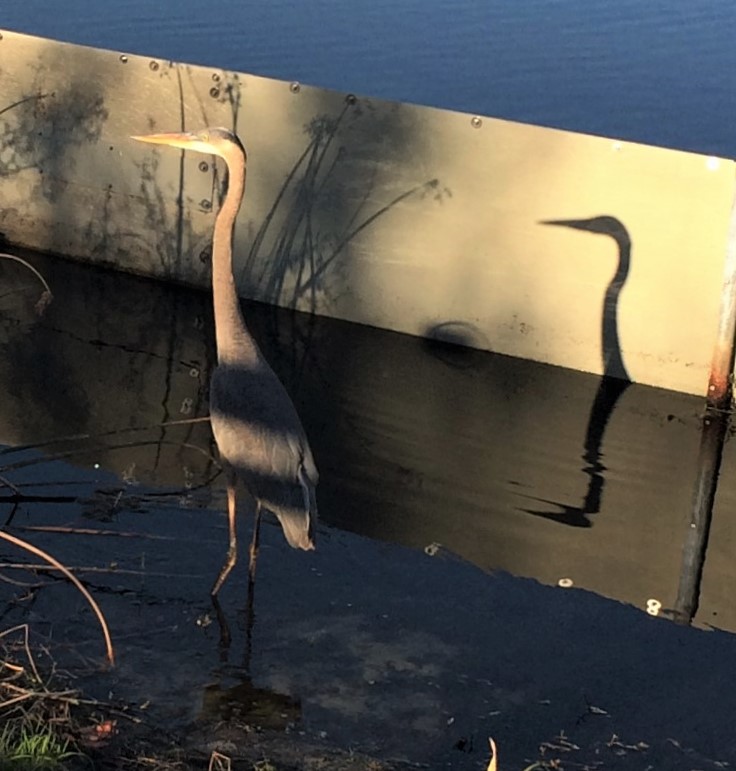